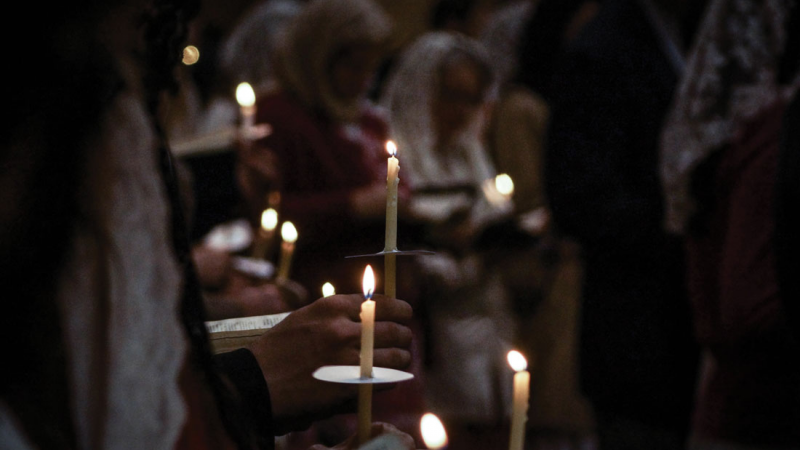 The Regina Coeli Report presents a tableau of images of the ceremonies of the Sacred Triduum, the final three days of Holy Week, observed throughout the U.S. District.

I have received confirmation that at the end of my 6-year term I will be transferred on August 15, 2014. I will then leave the U.S. District and take a new assignment at the General House in Menzingen, Switzerland. Fr. Jurgen Wegner is assigned as District Superior of the United States. Read more>

The Liturgies of Holy Week

Throughout the Lenten season, the Church has prepared us for the sacred experience of Holy Week. Not only do we see the Holy of Holies but we are asked to participate in the most sublime drama of history. The Regina Coeli Report presents a tableau of images of the ceremonies of the Sacred Triduum, the final three days of Holy Week, observed throughout the U.S. District.

The year 2014 falls between two important commemorations in Florida. The first is the 500th anniversary of the discovery of Florida in 1513 by Juan Ponce de Leon, the first European to set foot on what is now United States soil. He named the newly discovered country “Pascua Florida” (or “Flowered Easter”) because of the verdant landscape he discovered during Easter Week. As a Catholic Spaniard, his first act upon landing was to plant the Cross of Our Savior in the Florida sand and claim the land for God and Spain.

The priests of the United States District met for one week, arriving February 24th at St. Thomas Aquinas Seminary in Winona. Within a few hours, the seminary was filled like a beehive and had double its usual occupancy. With great generosity, the seminarians vacated their rooms for 80 visiting priests. Following a schedule of prayers, meals and recreational periods, priests and seminarians got to know one another. Lectures interspersed with times for reflection and discussion, periods of rest, and visits filled each day.

On March 15th Bishop Bernard Tissier de Mallerais conferred the sacrament of confirmation on 61 people at Our Lady of Fatima Chapel in Carnegie, PA near Pittsburgh. The little building was filled to capacity with family and friends to celebrate this momentous occasion.

This past summer over 50 seminarians set off to work at the new seminary site in Dillwyn, VA. This crew was tasked with preparing as much of the 1000-acre property as could be done in just 3 months. Working in three groups they opened up beautiful views of the country through the dense forest, and prepared land for an orchard to be planted early next year. Construction crews are currently working on the first phase of the building, consisting of the cloister and the administration buildings: everything but the seminary chapel.

St. Michael the Archangel Church and School in Farmingville, NY

Planning for work to expand the parking lot, update the septic system, and erect a school building at St. Michael the Archangel Church and School in Farmingville, NY began early in 2008. But it was not until the purchase of 1.6 acres adjacent to the chapel that the proposed expansion got off the drawing board.

Our Lady of Sorrows Church in Phoenix, AZ

“The blessing of the bell tower cross will be a symbol of progress and hope, and a celebration of the achievements of our community,” stated Phoenix’s Mayor Gregg Stanton in his congratulatory letter for the Open House and Cross Raising Event held at Our Lady of Sorrows Retreat Center on February 22nd.

Maria Stella Maris Mission, located in San Pedro, CA (near Los Angeles), is a block or two from the ocean. The church was named by Archbishop Lefebvre and was previously the military chapel of Ft. MacArthur. In 2012 Fr. Charles Ward made arrangements for the renovation to Maria Stella Maris.

“What is necessary is for the Catholics to begin to study the works of serious Catholic thinkers for guidance.” This is the purpose the author has in mind in writing about “19th Century Catholics & the Myth of Modern Freedom,” the second title of this meaty book. It presents a step-by-step guide to the historical growth of the Catholic counterrevolutionary movement, as well as its connection with the temporal import of the Incarnation and Christendom. It fathoms the depth of ideas which oppose the Revolution, flanked by many a liberal, and the counterrevolution of such Catholics as Luigi Taparelli and Louis Veuillot.