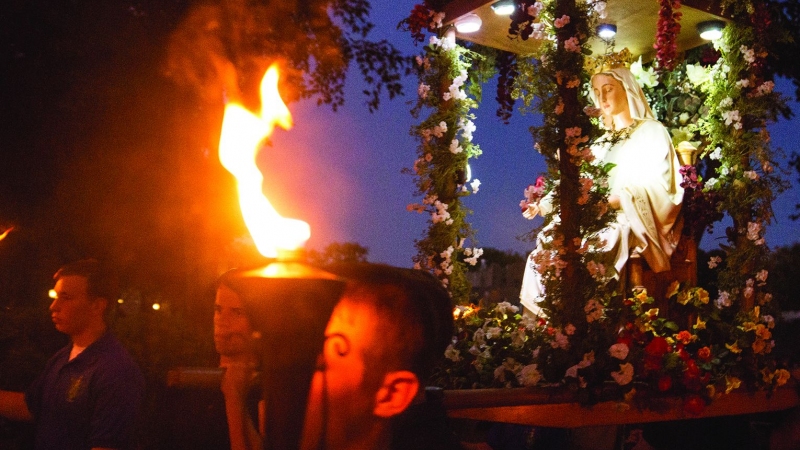 Read about the first screening of the documentary film about Archbishop Lefebvre, the Capuchin's US tour, and the torchlit rosary procession held at St. Mary's, KS.

Just after nightfall on Sunday, October 13th, 2000 candles and torches flickered through the streets of St. Marys, Kansas. The faithful of St. Mary’s Academy and College, as well as some from other chapels in the Midwest, were holding a candlelight procession to honor the Queen of the Holy Rosary.

We are invited to a new Rosary Crusade from January 1, 2014 to the Feast of Pentecost (June 8, 2014). This is an occasion to revive our devotion to the Immaculate Heart of Mary. Read more>

On Sunday, October 13th, the first public screening of the English language version of the documentary film, Archbishop Lefebvre: A Documentary, took place at the conclusion of the Angelus Press Conference for Catholic Tradition in Kansas City, Missouri.

The Capuchin Fathers from Morgon, France, toured chapels throughout the U.S. from October 15-November 12, 2013 to visit the Third Order of St. Francis members and welcome new members.

What are Third Orders? Third Orders are branches of religious congregations composed of laymen who participate in the good works, merits, and spiritual fruits of the congregation. The members of a Third Order are called Tertiaries.

Just after nightfall on Sunday, October 13th, 2000 candles and torches flickered through the streets of St. Marys, Kansas.

This short manual of family life for parents was compiled by a French SSPX priest who, oddly enough, had spent all of his priestly life in the same house with the apostolate of preaching retreats. Thousands of parents have passed
through his care and have profited by his spiritual succor.

Come to Olivet for three days of adoration, instruction, and contemplation, all centered on the very core of spiritual reality: the Holy Eucharist.