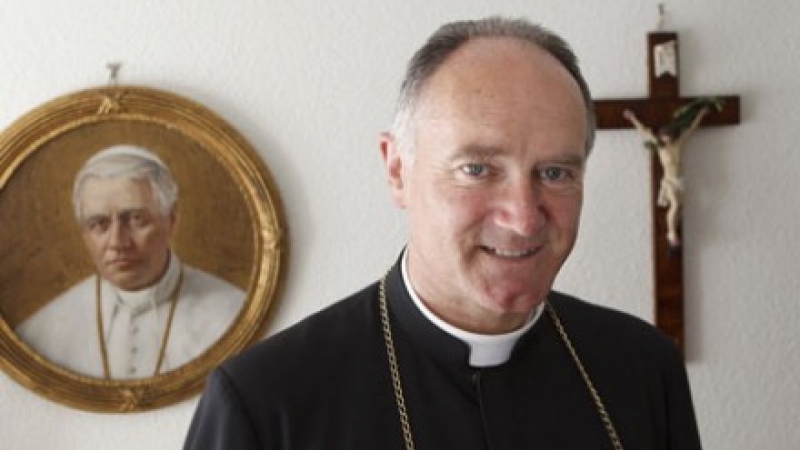 Read why the Catholic world should be grateful to Archbishop Lefebvre for his struggle to maintain the rights of the traditional Roman Mass, a fight that is based firstmost upon doctrinal issues.

The motu proprio, Summorum Pontificum of July 7, 2007 re-establishes the Tridentine Mass in its legal right. In the text it is clearly acknowledged that it was never abrogated. And so fidelity to this Mass—for the sake of which so many priests and lay people have been persecuted, or even severely punished, for almost 40 years this fidelity was never disobedience.

Today it is only right and just to thank Archbishop Marcel Lefebvre for having maintained us in this fidelity to the Mass of all times in the name of true obedience, and against all the abuses of power. Also there is no doubt that this recognition of the right of the traditional Mass is the fruit of the vast number of rosaries offered up to Our Lady during our Rosary Crusade last October; let us not forget now to express to her our gratitude.

Beyond the re-establishment of the Mass of St. Pius V in its legitimate right, it is important to study the concrete measures issued by the motu proprio and the justification given by Pope Benedict XVI in the letter which accompanies the text:

By right, the practical measures taken by the pope must enable the traditional liturgy—not only the Mass, but also the sacraments—to be celebrated normally. This is an immense spiritual benefit for the whole Church, for the priests and faithful who were hitherto paralyzed by the unjust authority of the bishops. However, in the coming months it remains to be seen how these measures will be applied in fact by the bishops and parish priests. For this reason, we will continue to pray for the pope so that he may remain firm following this courageous act."

The letter accompanying the motu proprio gives the pope’s reasons. The affirmation of the existence of one single rite under two forms—the ordinary and the extraordinary forms—of equal right, and especially the rejection of the exclusive celebration of the traditional liturgy, may, it is true, be interpreted as the expression of a political desire not to confront the bishops’ conferences which are openly opposed to any liberalization of the Tridentine Mass. But we may also see in this an expression of the “reform of the reform” desired by the pope himself, and in which, as he himself writes in this letter, the Mass of St. Pius V and that of Paul VI would mutually enrich one another.

In any event, there is in Pope Benedict XVI the clear desire to re-affirm the continuity of Vatican II and the Mass which issued from it, with the bimillennial Tradition. This denial of a rupture caused by the last Council—already shown in his address to the Curia on December 22, 2005—shows that what is at stake in the debate between Rome and the Priestly Society of St. Pius X is essentially doctrinal. For this reason, the undeniable step forward made by the motu proprio in the liturgical domain must be followed—after the withdrawal of the decree of excommunication—by theological discussions.

The reference to Archbishop Lefebvre and the Society of St. Pius X made in the accompanying letter, as well as the acknowledgment of the testimony given by the young generations which are taking up the torch of Tradition, clearly show that our constancy to defend the lex orandi has been taken into account. With God’s help, we must continue the combat for the lex credendi, the combat for the faith, with the same firmness.

Mass of All Time

40 Years of Fidelity: SSPX
Get the DVD>

April 10, 1970: Paul VI thanks the 6 Protestant ministers who assisted with creation of New Mass.