The Angelus - September / October 2022: Back to Land and Hearth 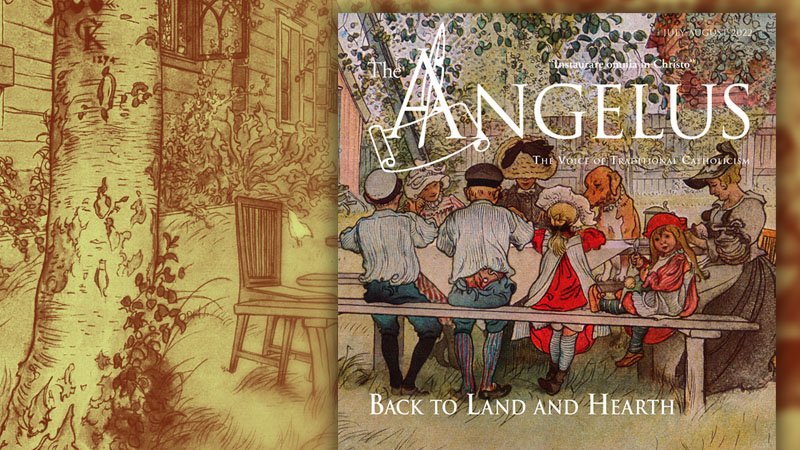 In the early years of the 20th century and the decades that followed, a so-called “back-to-the-land” movement emerged on both sides of the Atlantic.

Spurred in part as a reaction to mass industrialization and urbanization, the movement had a practical component as well when food shortages beset Europe during the First World War. Proponents of the movement, which came to include Catholic intellectuals such as Fr. Vincent McNabb, argued that the mechanization of life had eroded traditional communities and families while contributing to poverty, misery, and vice.

Although this movement began to fade by the middle of the last century, it never disappeared entirely. Traditional Catholics have maintained a steady interest in the land movement, relying in large part on the works of Fr. McNabb and authors such as Hilaire Belloc and G.K. Chesterton. In more recent times, the writings of John Senior have inspired not just a desire for agrarian living, but the formation of intentional communities built around traditional Catholicism. St. Marys, KS, which has become the heart and soul of the Society of Saint Pius X in the United States, is an example of such a community.

The Angelus this month features a series of articles on returning to the land as a means of maintaining and growing an authentic Catholic society. More than a romantic longing for “simpler times,” these pieces present a vision of living that is both deeply spiritual and eminently practical. Examples of localized living are on offer, as are some needful reflections on its cultural components.

While not everyone can uproot their lives and start fresh on the open plains, every Catholic can and should be on guard against the temptations of contemporary living, particularly consumerism, individualism, and social atomism. The lessons contained in this issue, and the further reading they inspire, can assist everyone in living engaged and godly lives.

How to Read This Issue: