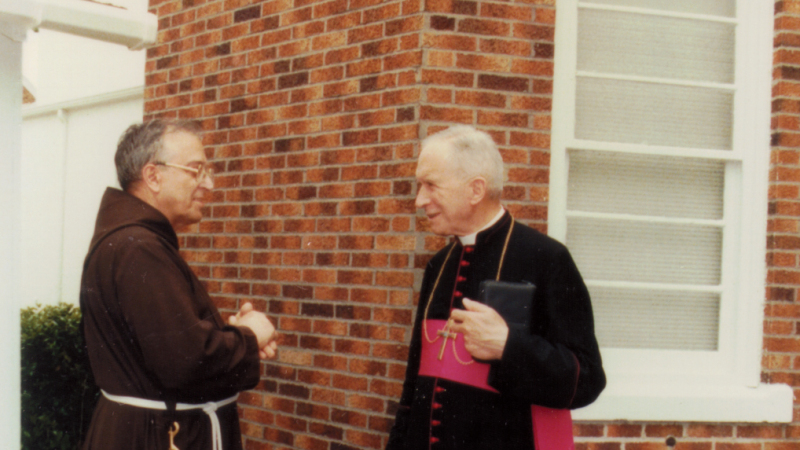 “I have been able to confirm with great satisfaction the extraordinary development of the groups of faithful Catholics both at the chapels of our priest-friends and in the Society. St. Mary’s College, the school of St. Louis, Missouri, the beautiful chapel and rectory of Phoenix, and, at the last moment, the acquisition of a big church in Kansas City, are reasons to hope for the continuation of the Church in the United States.”
—Archbishop Lefebvre (circa 1980)

The Angelus is putting in your hands a new issue to commemorate the golden jubilee of the Society of Saint Pius X. November 1, 1970 marked the birth of the SSPX and the last great work of its founder, Archbishop Marcel Lefebvre.

In an earlier issue of this year, we concentrated on the Archbishop’s legacy in Europe and his impact on Church history when his resolute stand for 2000 years of Church doctrine clashed with the revolutionary changes tolerated by Pope Paul VI. It is interesting to note that, presently, conservative circles outside of the traditional groups are singing the praises of this great man. It is thanks to him that, today, some priests still know what they were ordained for and can still celebrate the Mass of all times and not a Protestantized version of the Mass. In hindsight, we see how the firmness of one man in the face of the world, not unlike St. Athanasius, changed Church history or, at least, slowed down the process of auto-demolition denounced by Pope Paul VI himself. Long live the spirit of Archbishop Lefebvre among his devotees!

In the present magazine, the focus is on North America and the imprint of the SSPX in the U.S. and Canadian districts. Besides a sketchy timeline of the US events, a few lay and clerical writers bring up some memorable stories of the saga of the men and women who have shaped the traditional world in the last 45 years or so of our country. Whether it be articles on St. Mary’s or Shawinigan or words from a former apostate to those of a Superior General, you’ll discover snippets of our little Society still standing in the midst of spiritual ruins.

And, perhaps, what sounds at first astonishing but, ultimately, is quite clear is the “fixation,” the one cape which directed our founder. Archbishop Lefebvre throughout his long missionary life was guided by one leitmotif, one thing which drove his every action. He spoke of it only in the last years of his long life but it was deeply embedded in him: “Before the progressive degradation of the priestly ideal, I wanted to transmit in all of its doctrinal purity and in all of its missionary charity, the Catholic priesthood of Our Lord Jesus Christ to transmit the profound and unchanging spirit of the Catholic priesthood and of the Christian spirit essentially bound to the great prayer of Our Lord which His Sacrifice on the Cross expresses eternally. I was haunted by this conviction which nothing could shake, that to save and continue the Church, one had to train priests: holy priests and true priests.”

Let us make his wishes repeatedly known to the Sovereign Pontiff to liberate the Mass and allow all faithful Catholic throughout the world to “make the experience of Tradition.”

— SSPX Timeline
— “Beacon on the Plain”: Saint Mary’s, by Andrew J. Clarendon
— Mixing Joys with Sorrows, by Fr. Dominique Bourmaud
— An Apostate’s Journey Back, by John A. McFarland
— The SSPX Canadian District: “From Sea to Sea”, by Fr. Jacques Emily and Fr. Daniel Couture
— Bishop Fellay Speaks: For the Love of the Church, by Bishop Bernard Fellay

— Meditation on St. John’s Gospel, by Pater Inutilis
— The Holy Sacrifice of the Mass: The Canon—Part One, by Fr. Christopher Danel
— The Spirit of the Society, by Archbishop Marcel Lefebvre
— The Good Shepherd of the 1970s in the United States , by a Benedictine monk

— The Icon of the Baptism of Our Lord, by Romanus
— Can Anything Good Come from France? by Dr. John Rao
— How to Educate the Child to Order Their Belongings, by the Sisters of the Society Saint Pius X
— Questions and Answers, by Fr. Juan Carlos Iscara

— Complex Questions & Simple Answers, by Prof. Felix Otten, O.P. and C.F. Pauwels, O.P.
— Who is the Problem: The SSPX or Rome? by Fr. Jean-Michel Gleize
— The Last Word, by Fr. David Sherry