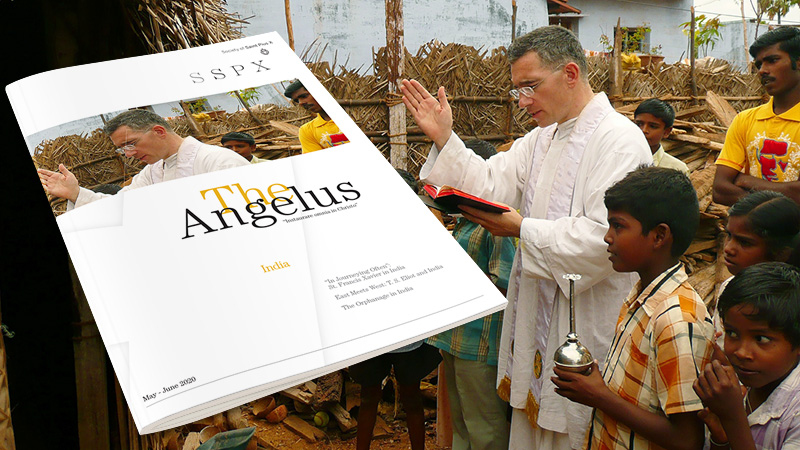 We commend to you, Venerable Brethren, in a special manner, the necessity of the sound religious training and moral formation of all who undertake this apostolate [of Catholic Action]. They must be “nourished up in the words of faith and of good doctrine” and “exercise themselves unto godliness” (I Tim. 4:6-7). As apostles of their brothers in blood they may win countless souls to Christ and, enlarging His Kingdom in India, may effect an ever wider extension of the inestimable blessings of that Kingdom of truth and life, of holiness, of justice, of love and of peace. What greater blessing could We wish your nation, what nobler ambition could inspire the Catholics of all India than the realization of such a divine plan?—Pope Pius XII, Radio Message, March 12, 1948

Letter from the Publisher:

This month’s issue of The Angelus presents a guided tour of Catholic life in India.  India is a name shrouded with mystique and fairy tales. This country has always fascinated the Western traveler. In a few sketches, authors are taking a close look at this populated world of unknown customs, tongues, and religions. If nothing else, India is teaching the modern world two forgot-ten truths: that religion is essential to social life and that religious plurality is mortal.

No doubt we at Angelus Press are delving into something which is beyond our comfort zone and far from our usual bearings. India recalls much more than tea and the elephants, more than Gandhi pleading for liberating the colony from English rule. It smacks of sacred cows, Hindu priests, and the slums of Calcutta.

Had we wished to evoke the present social, political, and even religious situation, we would have soon been out of our depths. Yet, thanks to one of our oldest missionary presences in Asia, right after the Philippines, our Indian priests and religious were willing to lead us by the hand and lift a little corner of life in this unchartered territory. This, along with a little trip to Pakistan, a former Indian province, and another trip back in time to honor St. Francis Xavier, we are givena fair taste of Christianity in the Southern tropics.

May 2020 marks also the anniversary of the canonization of the famous woman-warrior, Joan of Arc. A couple of articles sing the praises of this saint so much out of the ordinary. The Maid of Orléans is dear to many a young lady who honors her great strength of soul and her simple faith confronted by the lay and ecclesiastical courts.

Missionary apostles and warriors of God fought side by side in their struggle to plant God’s kingdom on earth. Although the means and spheres of influence vary considerably, they held onto the same faith and love of the True God made Man and ultimately conquered. Long live St. Francis Xavier and Joan of Arc! May they find many followers among our traditional circles.

Letter from the Publisher, by Fr. Jürgen Wegner

— Christianity in Pakistan, by Kennedy Hall

— The History of Catholicism in India, by Gabriel S. Sanchez, J.D.

— The Orphanage in India, by the Consoling Sisters

— How to Be a Missionary, by Fr. Therasian Xavier

— The Holy Sacrifice of the Mass: The Offertory—Part Three, by Fr. Christopher Danel

— The Millstone and the Scandal of the Cross, by a Benedictine monk

— The Icon of Pentecost, by Romanus

— Einstein and the Priest, by Fr. Frank Riccomini

— India: Is It the Graveyard of the Naturalist Enlightenment and Pluralism? , by John Rao, D.Phil. Oxon.

— Hush! Silence, by the Sisters of the Society Saint Pius X

— The Church Is Greater Than the Pope, by Fr. Roger-Thomas Calmel, O.P.