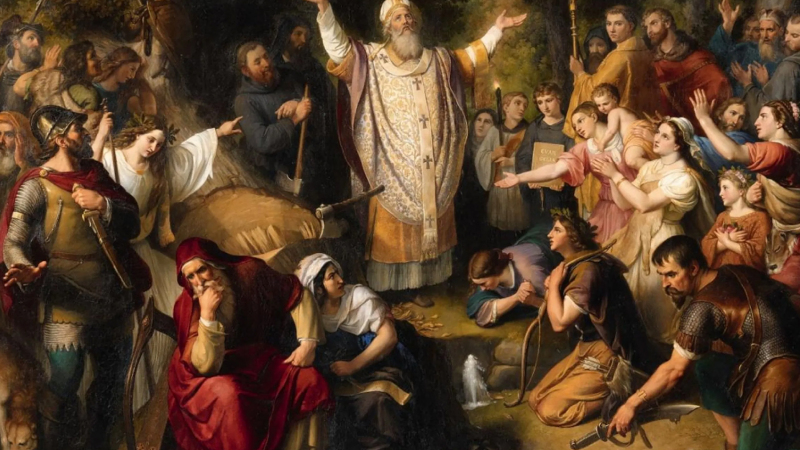 The veneration of images in the Church has a long and complicated history, the fruit of men’s gradual assimilation of the Christian faith.

This past year has been an eventful one if any, with the pandemic, followed by riots across the country and culminating with a contested presidential election. It will come to you as no surprise to read the present theme of The Angelus magazine.

Iconoclasm is not a new fad and it has been with man since the dawn of the Jewish religion, if not before. If then it had antireligious connotations rooted in the Old Testament, it has become today a powerful tool in the hands of anarchists and ideologists. The media covered—in more ways than one—mostly Confederate monuments because of political or racial discrimination. Yet in fact, most statues defaced, vandalized, or simply torn down by city officials were those of Christopher Columbus (33 statues) and also religious ones (8 statues of Junipero Sera; statues of Our Lord and the Blessed Virgin; icons across the country).

Perhaps the Kansas City memorial, dedicated to police officers killed in the line of duty, reveals best the mindset of the perpetrators. It was marked with graffiti, including messages with “Abolish the Police” and “No Room 4 Fascists.” In this one case at least, the mayor promised to restore the memorial and arrested some criminals. But, by and large, most of the vandals were never charged.

Was 2020 in the United States like the anti-Cristero Mexico of 1926 or the Spanish civil war of 1936? No, not quite. Fortunately for us, it did not end the same way and things finally dwindled down after hundreds of national and religious monuments went down. Yet, a bitter taste lingers in our mouth as we review the impunity the rioters enjoyed and their glorification by the mass media, along with the contempt heaped upon the forces of order and religion. Could this be just a dress rehearsal for more trouble ahead?

Whatever the answer to this enigma, it is important for all us of to be educated in the perennial principles of authority and society, along with the tenets of our faith and morals. May Our Lord and His Mother help to keep a steady front and stand for God and country.

— The Invisible Made Visible: The Church and Religious Images, by Romanus
— Icons and the Iconic: Visions of the Transcendent, by Andrew J. Clarendon
— Iconoclasm in the American South, by James Horne
— The Iconostasis, by Gabriel S. Sanchez, J.D.
— Christ the Pantocrator, by Jane Spencer
— From Roman Emperors to Images of Christ: Iconoclasm and the Byzantine Empire, by Andrew Latham

— Meditation on St. John’s Gospel—Chapter Four, by Pater Inutilis
— The Holy Sacrifice of the Mass: The Canon—Part Two, by Fr. Christopher Danel
— The Brown Scapular: From Habit to Soul, by Fr. Vincent Bétin
— Belief in the Visible and Invisible, by a Benedictine Monk

— Our Lady of Consolation, by Anonymous
— Demolishing Thor’s Oak, by John Rao, D.Phil. Oxon.
— Passing on the Love of Reading, by the Sisters of the Society St. Pius X
— Questions and Answers, by Fr. Juan Carlos Iscara, SSPX