Letter from Father Pagliarani about the motu proprio “Traditionis custodes” 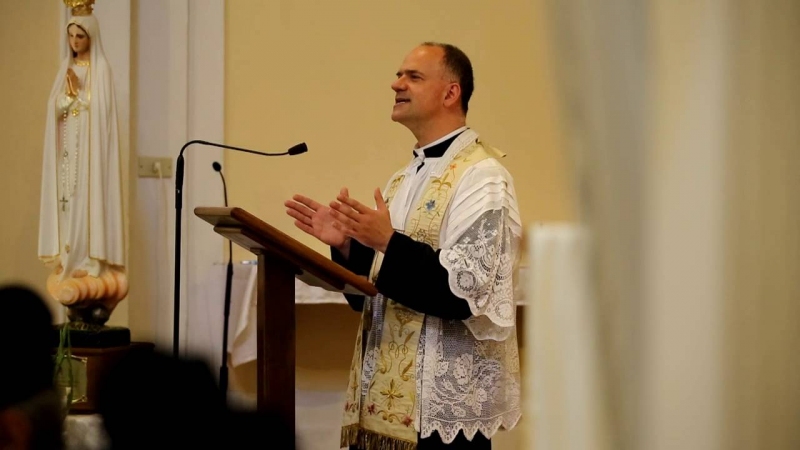 Letter from the Superior General of the Priestly Society of Saint Pius X, in light of the publication of the motu proprio “Traditionis custodes”

Dear members and friends of the Priestly Society of Saint Pius X,

The motu proprio Traditionis custodes and the letter that accompanied it have caused a profound upheaval in the so-called traditionalist movement. We can point out, quite logically, that the era of the hermeneutics of continuity, with its equivocations, illusions and impossible efforts, is radically over – swept aside with a wave of a sleeve. These clear-cut measures do not directly affect the Society of Saint Pius X. However, they must be an occasion for us to reflect deeply on the situation. To do so, it is necessary to step back and ask ourselves a question that is both old and new: Why is the Tridentine Mass still the apple of discord after fifty years?

First of all, we must remember that the Holy Sacrifice of the Mass is the continuation in time of the most bitter struggle that has ever existed: the battle between the Kingdom of God and the kingdom of Satan. This combat culminated at Calvary in the triumph of Our Blessed Lord. It was for this struggle and it was for this victory that he became incarnate. Since Our Lord’s victory was through the Cross and through His Precious Blood, it is understandable that its perpetuation will also be marked by conflicts and contradictions. Every Catholic is called to this combat. Our Lord reminded us of this when He said that He came “to bring the sword upon the earth” (Matt. 10:34). It is not surprising that the Mass, which perfectly expresses Our Lord’s definitive victory over sin through His atoning Sacrifice, is itself a sign of contradiction.

But why has the Mass become a sign of contradiction within the Church itself? The answer is simple and increasingly clear. After fifty years, the various elements that confirm the answer have become obvious to all well informed Catholics: the Tridentine Mass expresses and conveys a conception of Christian life – and consequently, a conception of the Catholic Church – that is absolutely incompatible with the ecclesiology that emerged from the Second Vatican Council. The problem is not simply liturgical, aesthetic or purely technical. The problem is simultaneously doctrinal, moral, spiritual, ecclesiological and liturgical. In a nutshell, it is a problem that affects all aspects of the Church’s life, without exception. It is a question of faith.

On one side is the Mass of All Times. It is the standard of a Church that defies the world and is certain of victory, for its battle is nothing less that the continuation of the battle that Our Blessed Lord waged to destroy sin and to destroy the kingdom of Satan. It is by the Mass and through the Mass that Our Lord enlists Catholic souls into His ranks, by sharing with them both His Cross and His victory. From all this follows a fundamentally militant conception of Christian life that is characterised by two elements: a spirit of sacrifice and an unwavering supernatural hope.

This battle that has been waged for the past fifty years, which has just seen a highly significant event on July 16th, is not a simple war between two rites: it is indeed a war between two different and opposing conceptions of the Catholic Church and of Christian life – conceptions that are absolutely irreducible and incompatible with each other. In paraphrasing Saint Augustin, one could say that the two Masses have built two cities: the Mass of All Times has built a Christian city; the New Mass seeks to build a humanist and secular city.

Since Almighty God has allowed all this, it is certainly for a greater good. Firstly for ourselves, who have the undeserved good fortune of knowing the Tridentine Mass and who can benefit from it! We possess a treasure with a value we do not always appreciate, and which we perhaps preserve too much out of simple habit. When something precious is attacked or scorned, we begin to appreciate better its true value. May this “shock”, provoked by the harshness of the official texts of July 16th, serve to renew, deepen and rediscover our attachment to the Tridentine Mass! This Mass – our Mass – must really be for us like the pearl of great price in the Gospel, for which we are ready to renounce everything, for which we are ready to sell everything. He who is not prepared to shed his blood for this Mass is not worthy to celebrate it! He who is not prepared to give up everything to protect it is not worthy to attend it!

This should be our first reaction to these events that have just shaken the Catholic Church. Our reaction, as Catholic priests and as Catholic laity, must be profound and more far-reaching than all those feeble and sometimes hopeless commentaries.

Our Blessed Lord certainly has another objective in mind in allowing this new attack on the Tridentine Mass. No one can doubt that in recent years many priests and faithful have discovered this Mass, and that through it they have encountered a new spiritual and moral horizon, which has opened the door to the sanctification of their souls. The latest measures taken against the Mass will force these souls to draw all the consequences of what they have discovered: they must now choose – with all the elements of discernment that are at their disposal – what is necessary for every well-informed Catholic conscience. Many souls will find themselves faced with an important choice that will affect their faith, because – and let us say it once more – the Holy Sacrifice of the Mass is the supreme expression of a doctrinal and moral universe. It is therefore a question of choosing the Catholic faith in its entirety and through it, choosing Our Lord Jesus Christ, with His Cross, His Sacrifice and His universal kingship. It is a matter of choosing His Precious Blood, of imitating the Crucified One and of following Him to the end, by a complete, rigorous and coherent fidelity.

The Society of Saint Pius X has the duty to assist all those souls who are currently in dismay and are confused. Firstly, we have the duty to offer them the certitude that the Tridentine Mass can never disappear from the face of the earth. This is an absolutely necessary sign of hope. Moreover, each of us, whether priest or faithful, must extend a warm helping hand to them, for he who has no desire to share the riches he enjoys is, in all truth, unworthy of possessing them. Only in this way will we truly love souls and show our love for the Church. For every soul that we win to Our Blessed Lord’s Cross, and to the immense love that He manifested through His Sacrifice, will be a soul truly won to His Church and to the charity that animates His Church, which must be ours, especially at this present time.

It is to Our Lady of Sorrows that we entrust these intentions. It is to her that we address our prayers, since no one has penetrated deeper than Our Blessed Lady, the mystery of the Sacrifice of Our Lord Jesus Christ and of His victory on the Cross. There is no one greater than Mary who has been so intimately associated with His sufferings and His triumph. It is in her hands that Our Blessed Lord has placed the whole Catholic Church. It is therefore to her that the most precious thing in the Catholic Church has been entrusted: the Testament of Our Lord Jesus Christ – the Holy Sacrifice of the Mass.