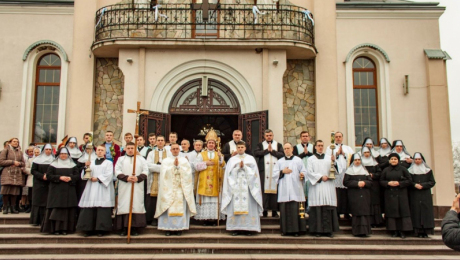 The following is an interview with Fr. Bogdan Vytrykush of the Society of Saint Josaphat (SSJK), a fraternity of traditional Ukrainian Greek Catholic priests associated with the Society of Saint Pius X (SSPX). It was conducted by the author of The Okie Traditionalist blog and with the blessing of Fr. Vytrykush's superior. The original interview, along with the interviewer's commentary, is available online here. We wish to thank the interviewer for permission to reproduce this interview. Minor stylistic edits have been made throughout, but the conversational style of the interview has been retained.

Since its founding in 2000, the SSJK has been strongly affiliated with the SSPX. In addition to supplying spiritiual and material support, the Society's bishops have ordained numerous priests for the SSJK over the years. In February, SSPX Superior General Davide Pagliarani issued a statement asking for prayers for Ukraine on behalf of the SSJK.

US District Superior Invites Faithful to Novena for the Quee

Everyone is encouraged - where it is feasible - between May 23 and May 31, the Feast of the Queenship of Our Lady, to attend Mass for the intentions outlined in this letter.

In this issue, we examine the cultural effects of World War I and how they contributed to the even greater conflict that was World War II. As several of the articles make clear, it is impossible to understand either breakout of mass...

As you know, May is the month dedicated to our Blessed Mother. As such, we should turn to her this month and ask for her intervention on our behalf.

Why is the Mass on Holy Thursday offered in the evening? What is the Mandatum? Why is the Blessed Sacrament translated to an altar of repose? Why is the high altar stripped? Fr. Goffine answers!